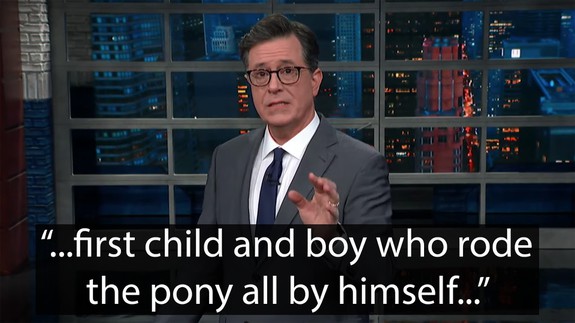 Stephen Colbert went after double his usual Trump quota during Wednesday’s edition of The Late Show.

After discussing Trump’s attempts to argue that Congress can’t investigate his finances, Colbert moved on to someone he describes as “first child and boy who rode the pony all by himself”: Donald Trump Jr.

“Last night Jr. struck a deal for a ‘limited’ interview with the Intelligence Committee,” says Colbert. “To be fair, every meeting with Don Jr. involves limited intelligence.”

What follows is talk of how Don Jr. is using similar tactics to his dad, culminating in an imagined conversation between the two of them that comes complete with Colbert’s very best Trump impersonations. Read more…

Trump impeachment trial: the 10 things you need to know

The Observer view on the coronavirus outbreak | Observer editorial

Scotland Is on Track to Hit 100 Percent Renewable Energy This Year, Slàinte Mhath!